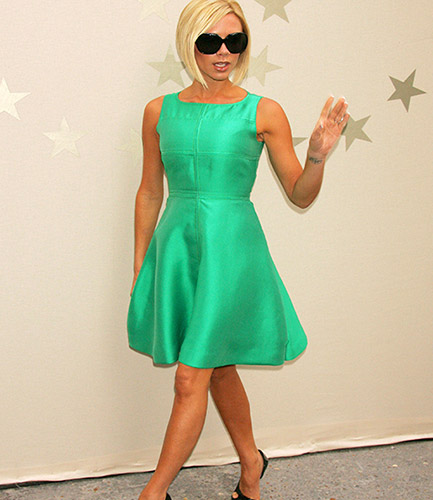 If you’ve ever hankered after Victoria Beckham’s extensive designer wardrobe, and you have a few pounds going spare, you might be in luck!

Victoria has announced that she’s selling off more than 600 pieces of fashion from her own wardrobe in support of charity Mothers2mothers. The auction, which will be run in association with The Outnet will take place from August 20 to 25, with all the items on sale having been valued by Christies.

Vogue editor Anna Wintour invited Victoria to South Africa in February, where she met with mothers2mothers founder Dr. Mitch Besser. The charity trains, employs and empowers mothers living with HIV,called ‘Mentor Mothers,’ who then help to educate other mums on how to prevent the transmission of HIV from mothers to babies and improve their health.

Victoria was so moved by the experience that she wanted to do anything she could to help raise awareness, hence the sale.

A lot of the clothes being sold off are high end designer pieces which were especially designed for Victoria, so you will need to be teeny tiny to be able to fit into them, but if you’re Posh sized, you could get yourself a gorgeous designer frock.

“I’ve loved wearing them, however I now feel it’s someone else’s turn to enjoy them.” Victoria explained. “We approached The Outnet as they have an incredible global reputation and are the perfect partner for us to build awareness and raise as much money as possible for Mothers2mothers.”

Victoria has been quoted more than once as saying she isn’t a great fan of her arms, but even so there are a lot of sleeveless numbers in there. Grazia Magazine reported in 2007 that she had become paranoid about her arms because they were a “real sign of ageing” – which is a shame, but wondered what some of the gorgeous dresses might look like with a strategically-placed pair of Wingz (you did know they come in small sizes too, didn’t you?)

You could match this stunning Alexander McQueen dress with grey chiffon flare Wingz for volume, or maybe some white/black three quarter day Wingz for a more subtle look?

If Victoria wanted to add sleevage to this Louis Feraud dress from 2008, we reckon a contrasting white lace sleeve would make all the difference, too.

If you’d like to see what else is on offer and help Victoria support the charity, you can register online and get access to the sale which will include accessories too, everything from hats, shoes, bags, jewellery, designer ready-to-wear, costume pieces, coats, skiwear and evening dresses.

You can register at Theoutnet.com/vbcharitysale

Wingz –vs- Cardigans and Shrugs